Apple’s portion of the entire smartwatch market has reportedly shrunk in the first calendar quarter of 2020 amid a global industry that’s continuing to grow despite COVID-19 concerns.

Global smartwatch shipments reached 14.3 million units in the first quarter of the year amid concerns about the coronavirus. That represents a 12% year-over-year increase, according to a report from analysis firm Canalys.

According to analyst Vincent Thielke, that’s due to slower performance in Europe and North America since Apple customers were “switching their attention to AirPods as a ‘must-have’ accessory.” Strong overseas demand for the Apple Watch offset that switch, he added.

The Apple Watch is still the market leader in smartwatches with its 36.3% share of the market. The closest competitor is Huawei with 14.9%, followed by Samsung with 12.4%. Apple and Huawei also managed to capture the greatest number of new users Apple CEO Tim Cook has said in the past that most Apple Watch buyers are new to the product. 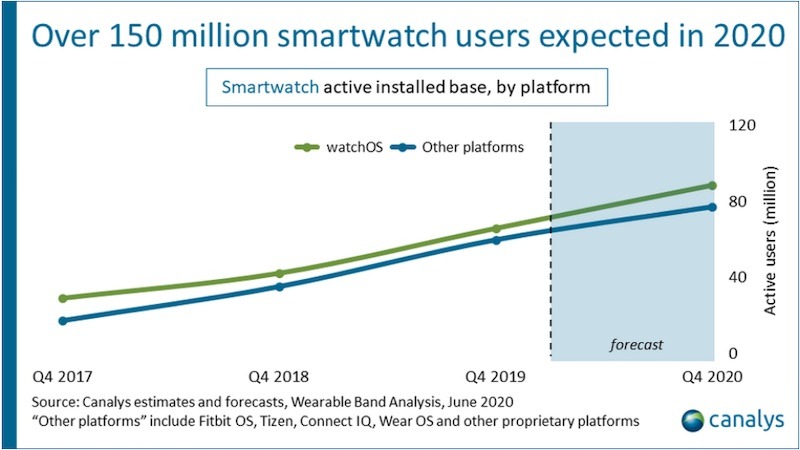 The smartwatch market is predicted to continue growing at a steady rate. Credit: Canalys

The smartwatch market continues to grow in China, with shipment increasing 66% in the first quarter. Cellular-equipped models, which China leads in, allowed Apple and Huawei to grow smartwatch shipments quarter-over-year — something that Canalys analyst Cynthia Chen calls “unprecedented” during the first quarter of a year.

“We expect China will be the key smartwatch growth driver in 2020 as a result of its strongly recovered economy and a greater push from local players,” Chen said.

Despite increasing competition from Android vendors in China, Thielke said that “the Apple Watch is locking in an increasing portion of the iOS base there, offering greater assurance of future iPhone upgrades.”

Apple’s wearables business hit $10 billion in revenue in the first quarter of 2020 and set a new quarterly record in Q2 2020. Apple no longer releases individual unit sales for any of its products, including Apple Watch.

Analysis firms like Canalys don’t have access to Apple’s supply chain or sales numbers and Apple has not reported sales data in over two years. Instead, they make estimates based on independent research which has, over the years, been dismissed as incorrect by Apple executives.

Only 4% of iOS users in US are opting in to ad tracking, report says

Apple’s Find My has a hidden AirTag detail mode

Apple to close Virginia’s MacArthur Center store on May 14

Mac app bundle: get Parallels Desktop Pro, Luminar 4, plus 10 other apps for...

Canon XC10 4K Digital Camcorder Is Out: Versatile And For Only...

ABOUT US
Tech News Now is Tech news website. We provide you with the latest breaking news and videos straight from the Tech industry.
Contact us: contact@technewsnow.com
FOLLOW US
© Tech News Now 2019
MORE STORIES